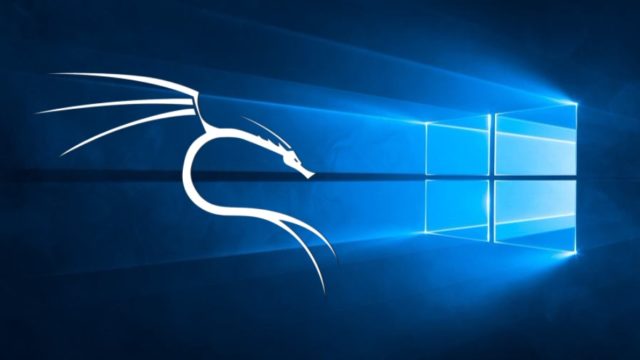 Kali Linux distribution is available for download on the official Microsoft App Store on Windows 10. This distro can be download and installed without any registration, dual boot or virtualization. This news was first announced a couple of weeks ago when the company was testing Xfce desktop for WSL.

Kali Linux is popular, the open-source distribution is used widely for penetration testing. With Kali, you will get a lot of penetration tools out of the box.

“This is especially exciting news for penetration testers and security professionals who have limited toolsets due to enterprise compliance standards.”

The target audience is developers and sysadmins who want to write or deploy applications for Linux machines running on Cloud. Running Linux distros under WSL has its own shortcomings. The system is as secure as is Windows 10. But the Kali Linux team sees some great possibilities too:

“While running Kali on Windows has a few drawbacks to running it natively (such as the lack of raw socket support), it does bring in some very interesting possibilities, such as extending your security toolkit to include a whole bunch of command-line tools that are present in Kali.”

Being able to run Linux inside of Windows 10 gives developers native access to tools from both worlds: Linus and Windows as well.

Getting Kali Linux Installed on WSL

Below is quick description how to setup and install Kali on Windows 10 system.

Update Windows 10 and after that open an PowerShell as administrator. Install Windows Subsystem:

Updating Kali Linux on WSL is no different from any other instance of Kali:

Installing tools from the Kali Linux repository is usually done via apt commands. For example, to install the Metasploit Framework, you can simply use: