To understand the story let’s use some simple examples: the company maintains a policy regarding adding and removing a passenger to a flight. The flights may be a few types: 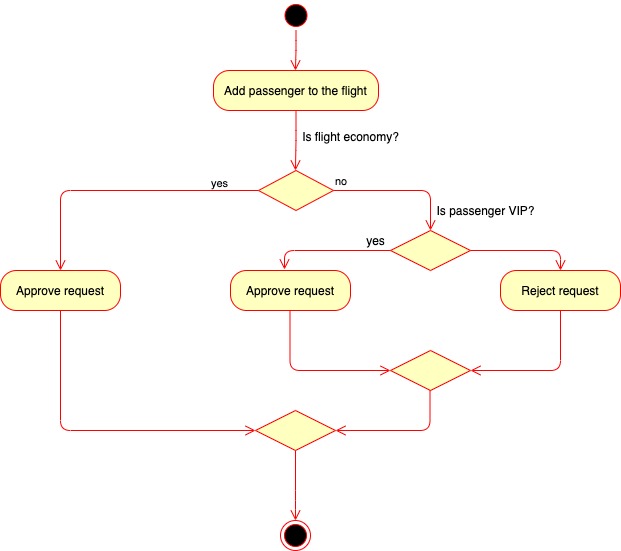 And there is also a policy for removing a passenger from the flight. It also involves answering yes/no questions. A usual passenger may be removed from a flight, a VIP passenger cannot be removed. 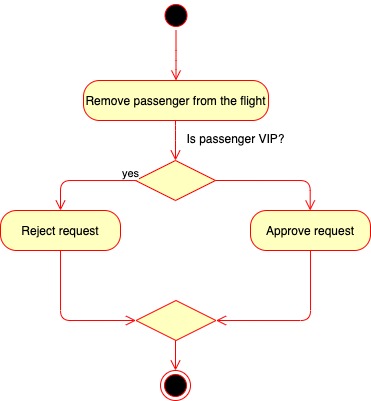 Usual passenger can be removed from a flight, a VIP passenger cannot be removed. As we can see from these two activity diagrams, the initial business logic focus on decision making.

Below is a simple class of the application. The flight class has two sub-classes: EconomyFlight and: BusinessFlight. The police of adding a passenger and removing a passenger are encapsulated into: addPassenger and: removePassanger methods. As these methods are inherited from the Flight class and are at the level of each subclass, we may say that the decision of each policy to apply will be practically made at runtime through polymorphism.

From TDD to the BDD

Below are tested that has been build as TDD. We have here 4 tests. From their names, we understand that we have two flights, economy and business and two passengers: usual and VIP. We are doing some operations with these pairs.

These tests are good but:

To change to better we can adopt some conventions:

Below is simple test written in new way:

This is the first step from TDD to the BDD application, introducing methods with significant names using nested tests and annotating them. This way helps us to clarify tests but we use only JUnit5 and its annotations. This is not full BDD and to use full features of BDD we will switch to the special frameworks.